There are simply enough options in the Tweed Coast to have the most amazing holidays you could imagine. 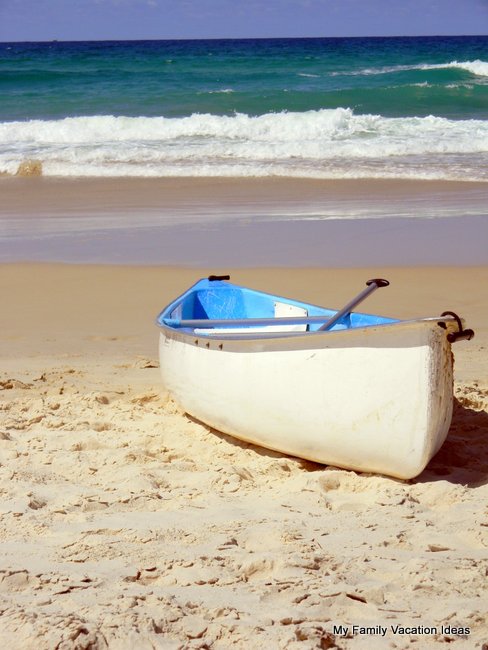 I didn’t realise how true this was until we completed our road trip down the east coast of Australia and rediscovered how exquisite this area is. 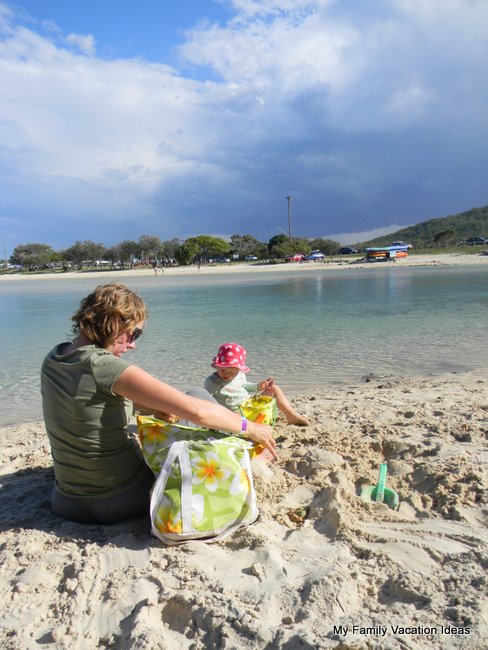 Beach near Pottsville on the Tweed Coast

The beaches are amazing with their bright blue colours and white sands – the hinterland is amazing full rich green rainforest colours and laid back  hippie towns. 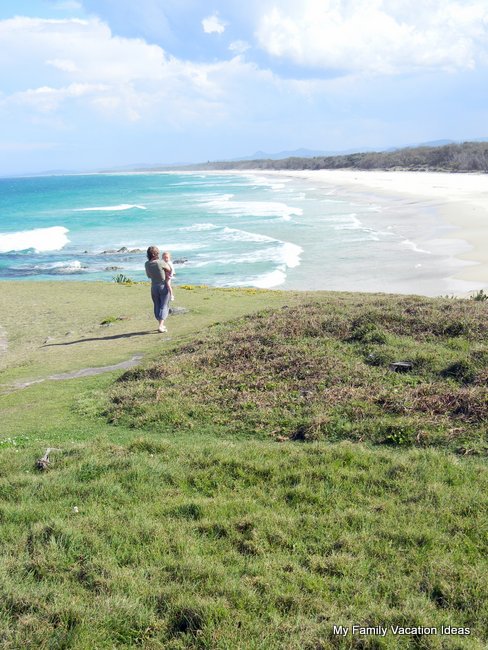 Beach near Pottsville on the Tweed Coast

Back then we stayed at a tiny little speck of a village located on miles and kilometers of deserted beaches called Wooyung. As far as I know the little motel there is operational today and we paid about $65 a night for the experience of having one of the best endless beaches you could imagine at your doorstep – complete with sand that actually squeaks when you walk on it.

When we moved to Australia we came back to the Tweed Coast again again and we made multiple excursions to all sorts of places - one amazing day trip after another over the years. Now we have a child we continue the tradition with her not out of habit but because of the ability of the region to deliver great holidays and travel experiences. 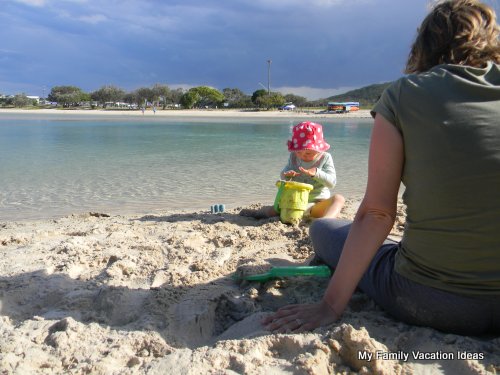 Kid-friendly beach on the Tweed Coast

The Tweed Coast is surely one of the most exceptionally beach paradise holiday locations in Australia, but is often overlooked because of it's proximity to the Gold Coast – which is almost it's total opposite in terms of family friendly holiday experiences.

During our family road trip down the east coast of Australia we found ourselves at some quite amazing beach settings – but I often found myself comparing these to the wonderful Tweed  Coast beaches. Once we even visited  a beach often described as the most wonderful beach in New South Wales and is in the Guinness Book Of Records as having the whitest sand in the world but only found myself suggesting people go check out TK Caberaita Beach on the Tweed Coast.

We usually have stayed at Hastings Point on our numerous visits to the area. This has suited us well with our toddler as they have yet to charge us for her yet. Now she is beyond the age where we can get away with not paying for her we will look at staying at any one of the many other great tourist parks in the area. Sure we won't like giving up staying at a park which has treated us well and is rated as one of the, if not the top Holiday Park in Australia but we like to vary our experiences in any case and we have been told by people who have called up during the holidays that the Hastings Point Big 4 is now charging exorbitant dollars for camp-sites during the holidays. We simply can't compete with the doctor and lawyer mums and dads which outbid each other for some of the top Big 4 tourist park spots on the East coast. 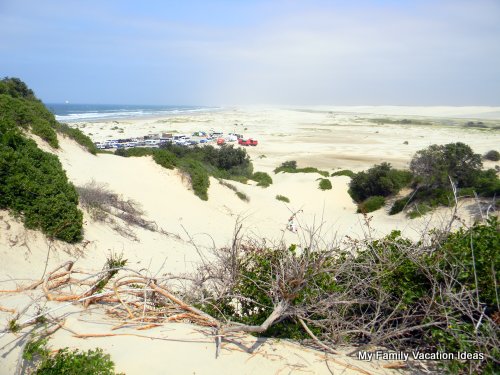 It's hard not to seem like an imposer this this sand world seemingly devoid of most life forms. We included this as part of our stay at Stockton Beach Holiday Village which is where we decided to stay to see the Newcastle area and it was one of the more amazing experiences you can have on an Australian Road Trip.

A fisherman sitting in his van with his red dog says a friendly, "hello" as we are setting up a picnic in the picturesque and sunny town park down by the fishing wharf . After finding out "Old Mate" has lived in his van cruising around on fishing trips with his friends in the rich fishing grounds around here. He is here to visit his mum and looks comfortable in the summer sun without a tee shirt on. For us  Queenslanders it doesn’t particular hot – but pleasant on the skin -  even though on the radio they are talking about the record hot weather. Old Mate's mum tells us she would not want to live in any other location, and looking out over the sparkling harbour to the peaceful township I can understand why 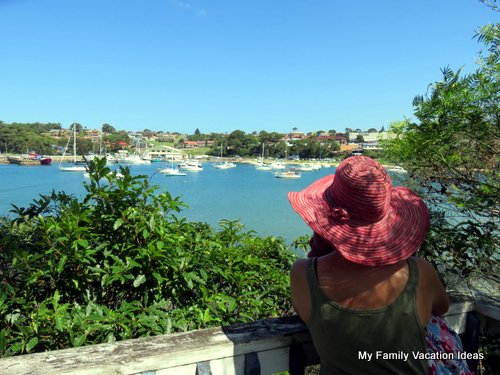 A fisherman sitting in his van with his red dog says a friendly, "hello" as we are setting up a picnic in the picturesque and sunny town park down by the fishing wharf . After finding out "Old Mate" has lived in his van cruising around on fishing trips with his friends in the rich fishing grounds around here. He is here to visit his mum and looks comfortable in the summer sun without a tee shirt on. For us  Queenslanders it doesn’t particular hot – but pleasant on the skin -  even though on the radio they are talking about the record hot weather. Old Mate's mum tells us she would not want to live in any other location, and looking out over the sparkling harbour to the peaceful township I can understand why. 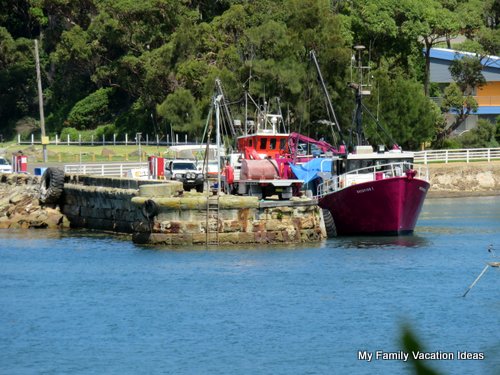 Down on the harbour itself we decide to take a walk out a small fishermen’s jetty to stretch our little girls and our own legs and soak up the ample character of this location provided mostly by the fishing boats. Reading a sign we find out they hold a festival here Ulladulla to bless the fishing fleet but it seems it has already been blessed by it's serene looking harbour and clear waters. 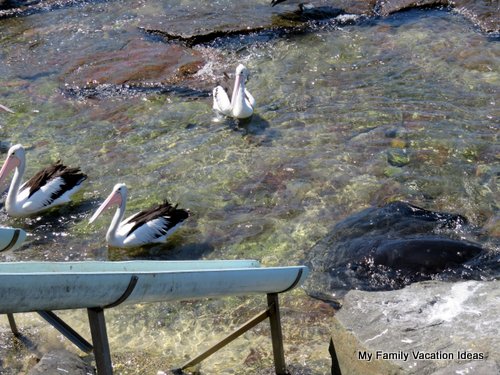 The own of Milton is certainly worth a stop. We did this and were rewarded – stooping by the sour-dough bakery which did not disappoint. We are sticklers for healthy food and don't usually buy meat pies- but the pies at the Sour-dough bakery were delicious and made with butter pastry instead of the usual rancid oils. We stocked up on a few delicious loaves of bread for the road. Taking our stash back along the character filled historical main street with views down to the sunny meadows and the Mollymook surf beach it seemed this was the perfect place to live.  Down the road a little on the main highway there is one of the biggest fig trees I have ever seen, with plenty of branches for kids to play on. 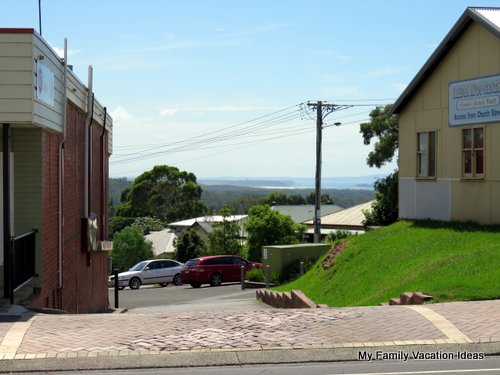 Later in our around the Australia journey we met a wonderful couple who moved here from Sydney after retirement. This is a fairly common story for the area as those with the means to support  themselves or a pension move to this idealistic small town location to enjoy the sea change.

The famous celebrity chef Rick Stein opened up a seafood restaurant to open up a restaurant in this blessed Mollymook surf beach we could view looking down from Milton hill. While Mollymook is not the most water friendly beach for small kids nearby Lake Conjolla has shallow waters and is surf free. 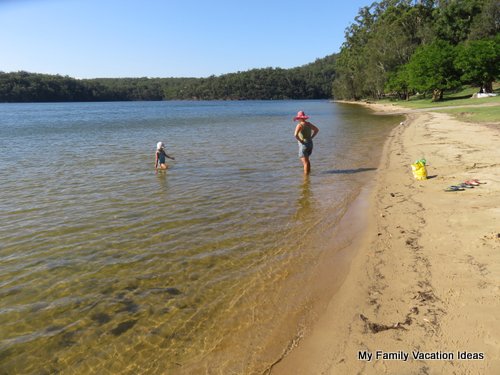 Our trip to Caves Beach NSW on the Central Coast.

We visited Caves Beach on a day trip from Stockton Beach – on the other side of Newcastle. Caves Beach seemed like an unlikely, random activity for us to do, but we had already seen some good reviews on and decided to chance our luck to see what it was like. We were richly rewarded by a wonderfully imaginative looking cave system for our daughter and us to explore. Really you could not have designed a better system for kids to explore, with wonderful little wading pools lined with fluorescent green moss. 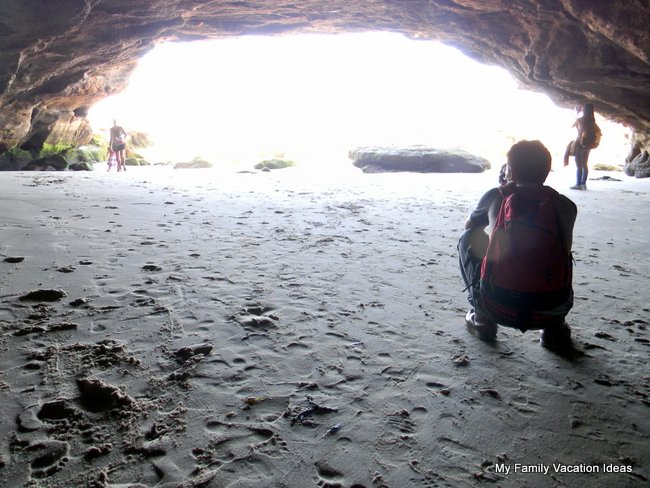 When you first enter the attractive looking, but not exceptional beach by the car park, you would not imagine the cave system at the end of the beach would hold such kid friendly experiences. We were drawn into this world and relished every little nook and cranny we went through. While not a the type of cave system serious cavers would appreciate, for mums and dads looking to keep their kids safe while enjoying a free natural attraction, it was ideal. 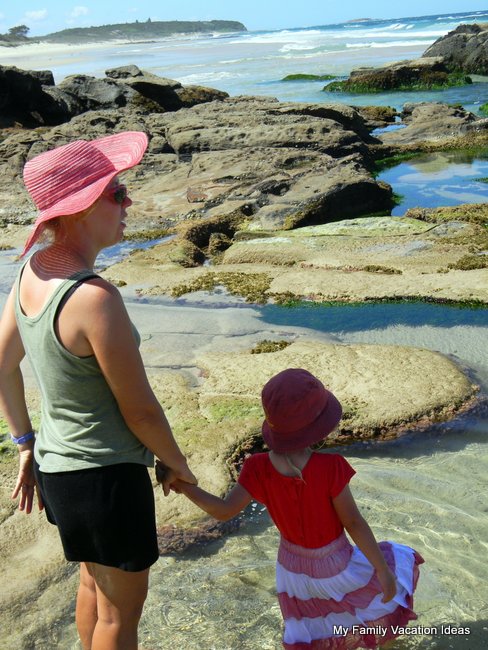 Why Seal Rocks was on my radar for a day trip from Forster was a bit of a mystery. We hardly knew anything about the place as we set of on the hour road trip down the coast through the great Myall Lakes district. 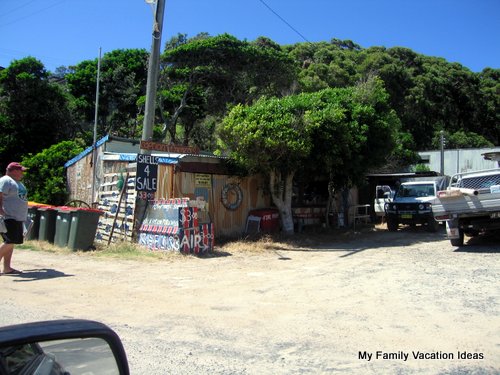 Surely we were not going find real seals but the name did seem to invite visions of some type of pristine escape. We were not to know that when we arrived we would arrive at an Australia that belongs to another time in history, before the developers won, and relaxed cafes and dusty beach roads were the main signs of paradise found. 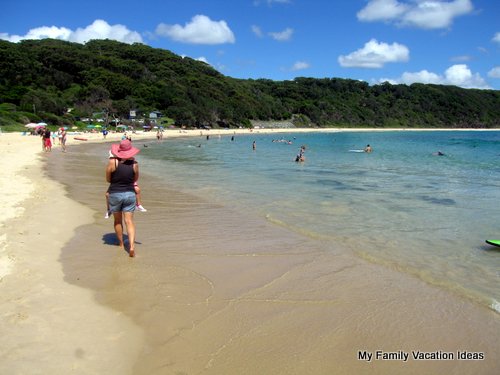 The roads there got narrower the closer we got, until we were down to a single lane. And although I was travelling at the maximum legal speed I was getting seriously tail-gated. As is my habit when followed by an obviously obnoxious tailgater I slowed down and enjoyed the drive all the more. Not wanting to inconvenience anyone else I kept a good eye out to see I wasn't slowing anyone else down. Eventually I found my softer side and pulled over to watch the somewhat psychotic energy of the supped up SUV muscle car fury past  in obvious distress and full of insults. 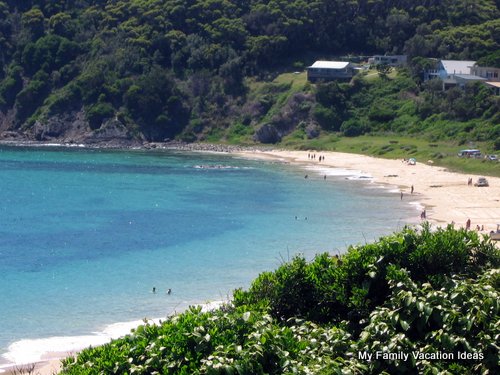 I'm not sure if the driver had chosen to visit this pristine natural location to let nature chill them out from their obvious type A tendencies or if the driver simply liked the hobby of Saturday summer long weekend tailgating. I was beginning to wonder if the trip would live up to expectations when we rounded the final bend and was greeted by the magnificent blue bay with swathes of families sealing around on the playful beach.

To top it off Muscle Man had lost the last remaining good car park to us because he had been to aggressive in seeking a better park closer to the beach. I gave my nicest smile as I slipped into the park while watching him drive away up the hill looking for any park now. Apparently this place is popular on Summer weekends. Such a lot of happy energy of families playing on the beaches was evident as we inspected the beach and took the time for a little rest and relaxation ourselves. About the only person who wasn't happy was Mr. Muscle Man who seemed to have picked up a severe oil leak and was busy under his car trying to fix it. 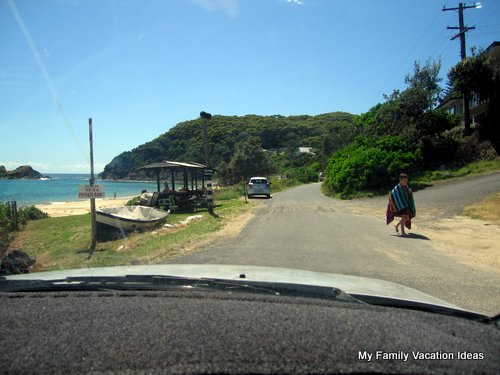 Beyond the bay was another which was the entry way to Sugar-loaf Lighthouse which was an enjoyable 20 minute walk which at the end offered some pretty incredible views to beaches  which head of for miles in three different directions. We were advised by the locals that the ding signs were not really a concern for our three year old and that they are rarely sighted. Follow the directions on the signs and you won't have any problems. 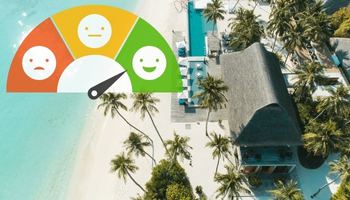 While we may receive advertising income from some links our best resort and destination selections are independent. See how we rate! 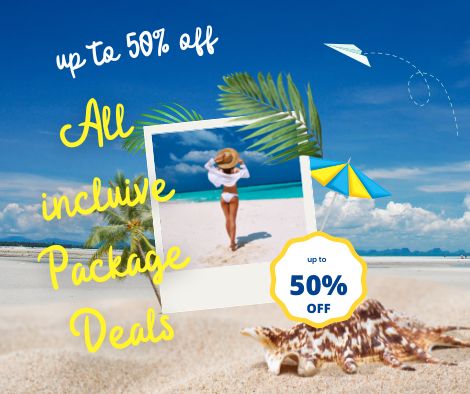 Disclosure: While display and affiliate income maintain the project our large network means our reviews can remain independent.